Today I fell in love. With a pair of skis. Made by a Frenchman.

'Cause if i can't ski in the Alps, I'm going to click into a pair of skis made in the Alps... The rockin' Chamonix 87s.

Responsive. Snappy. I like a ski that responds - POW! - in a nano-second for quick arcs. It's the steep-and-skinny-trail Vermonter in me.

And, most importantly, they're FUN.

I'm psycheddddd to play on these this season. And will test them out in more variable terrain. PRAYING FOR POWDER... help me out, people. Pray!

For more information:
-Funny: East Coast vs Out West Skiing - how to prepare for your family ski trip
-Cham Women 87
-If we lived in the French Alps & worked for a Ski Company
-Cham W 87 Review

Posted by Outdoorsy Mama No comments:

We came upon a Christmas Tree.... Merry Christmas to All!


We came upon a Hiker's Christmas Tree.

On a trail. On a mountain. In the middle of nowhere.

The star had fallen off.

We commenced a star Search & Rescue... Little Cindy Lou Who. Who was much more than 2, jumped on his shoulders and lifted that star back to the top of our magical Hiker's Christmas Tree... Ahhh. Yes. "Christmas day will always be as long as we have we."*

May your Holidays be filled with stars and trees and graceful, grateful, gracious moments.

Love and giant THANKS for a great year,


Posted by Outdoorsy Mama No comments:

Before You See the Movie “Wild” with Reese Witherspoon, Check Out “Tell It On The Mountain” As Billygoat, Eagle-Eye and Jackalope Tackle 2,600 Miles on the Pacific Crest Trail and Suck You into Their Honest, Emotional Stories. On DVD. REVIEW

As I crash on the couch and gobble popcorn with one of my nine year olds, our eyes are wide as we watch each person in the gently absorbing “Tell It On the Mountain” bend and sway both physically and emotionally with the high water crossings, high snow pack trekking, crappy weather, gorgeous vistas, disgusting ingrown toenails, and other life shaping moments that the Pacific Crest Trail, the “PCT”, throws at them for 2,663 miles.

A lean, intense, uber-hiker “Scott” breaks Pacific Crest Trail records with his average 40 miles a day. Literally stomping through forest fires while saying merely: “OK, NOW, it’s starting to get hot.” And sweating through stomach-churning giardia attacks – while we watch in horror and admiration. I feel like grabbing his arm through the screen to advise: “Dude, take a nap!” Not this guy.
A young, endearing, engaged couple hikes from Mexico to Canada, and halfway through, stops to throw a full-blown wedding. The bride wears her traditional white, puffy dress and, I kid you not, her PCT backpack. Their honeymoon? The rest of the PCT to the Canadian border.

Grey-bearded, trail-name Billygoat lives on the PCT April through September because his wife, Meadow Mary, “lets him” – wink – and because it is where he feels most at home. You will fall for this scruffy sage, as Billygoat hikes not for the records or the numbers, but because of his pure, you-can-touch-it, soulful love of the trail.

There are other leading characters in the movie including Mother Nature, Trail Angles, and the PCT itself. How could they not play a leading role? And watching this group of hikers bump into them makes it an emotional and sensory evoking drama that has me burst: GET ME ON THE TRAIL, stat, people!

Our tripping-up-note was that the subtitles often went lower than our normal, wide-screen TV….? A technical note, possibly self-inflicted, that was really no big deal. Also, the movie can feel a little long. So we chopped it in half between two nights.

Overall, this movie will inspire experienced hikers and backpackers to get out on the trail again. And it will show less experienced outdoor folks the normal, grubby, real side of backpacking, with it’s peaks and valleys both mentally and physically and, for sure, geographically.

I see the Pacific Crest Trail in my future, in my family’s future. Though maybe not the full 2,663 miles that spans from Mexico’s “Hola!” to Canada’s “Eh?” …. But I do think a High Sierras, Yosemite PCT section-hike is calling my name.

Now, I just need to find a wise old sage named Billygoat or an ultra-intense Scott to guide me along the way. Or, maybe, maybe i'll just trek it solo...

“Tell It On The Mountain, Tales from the Pacific Crest Trail” $23-25
Released February 2013. Documentary. Available on DVD. 122 minutes.

Disclaimer: Tell It On the Mountain was sent to me at no cost for review. Opinions, as always, are my own.
Posted by Outdoorsy Mama 3 comments:

Micro-Adventure California. If You're Having a Blast or Cursing the Gods, It's a MicroAdventure. Dipsea. Rain. Wet. Slippery.

Three sets of the famous 680 stairs of the Dipsea Trail.

Surrounded by redwoods. As tall as the masts of our Mayflower ships. And as wide as our stomachs after a massive Thanksgiving Day feast. You know we over-did it. A little. Or a lot.

I was motivated. Feet flying.

If you're having a blast. Or cursing the gods, it's a Micro-Adventure. Make your own. 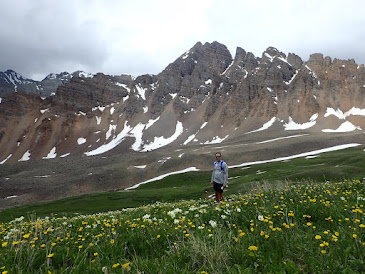